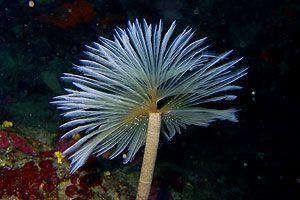 After a descent into the blue to a depth of 28 meters, the dive to the Cathedral begins at a wide opening, which leads to a large cave whose vault is more than 15 meters high. The cathedral owes its name not only to its large dimensions and its spectacular skylight, but also to a large ledge like an altar, which holds a Buddha statue. At the back of this improvised natural altar is the exit of the cave, a large crack that is part of a wall full of red coral branches. Due to its great depth (between 32 and 47 meters), the diving time at the bottom is usually short and it is only recommended for experienced divers. Thanks to its backlights and spectacular landscape the Cathedral is one of the favourite dives of underwater photographers and videographers. The Cathedral has also an emotional component for us since the former owner of Subfari, dear Peter Alexander Reiserer, rests in spirit among its calm waters and welcoming walls.
Abrir chat
¿Podemos ayudarte en algo?
Usamos cookies para asegurar que te damos la mejor experiencia en nuestra web. Si continúas usando este sitio, asumiremos que estás de acuerdo con ello.AceptarPolítica de privacidad